There are three types of behavioral learning:

About the Three Types of Behavioral Learning 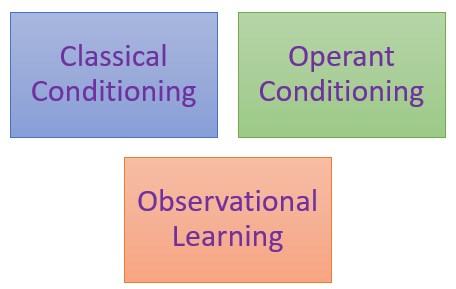 Behaviorism is the school of thought that seeks to measure only observable behaviors. Hence, it only examines outward behavior when trying to understand if learning occurred.

Behaviorism stems from the work of John Watson, B.F. Skinner, and Ivan Pavlov. These Behaviorism theorists believe that knowledge exists independently and outside of people. They view the learner as a blank slate who must be provided the experience. Behaviorists believe that learning actually occurs when new behaviors or changes in behaviors are acquired through associations between stimuli and responses. Thus, association leads to a change in behavior.

There are two core theories that stem from Behaviorism;

As indicted above, observational learning is a bridge between behaviorism and cognitive learning.

The Three Types of Behavioral Learning

The theory of classical conditioning was introduced by Russian physiologist, Ivan Pavlov. Pavlov conducted his classic experiment involving dogs. In his experiment, he conditioned the dogs to associate the sound of a bell with the presence of food. He paired the smell of food which was the naturally occurring stimulus with the neutral stimulus of a ringing bell. Once an association had been made between the two, the sound of the bell alone could elicit a response. The dogs responded to the sound of the bell by salivating.

In his experiment, the bell was neutral stimulus since the bell itself did not produce the dogs’ salivation. However, by pairing the bell with the stimulus of the smell of the food, which did produce the salivation response, eventually, the bell by itself was able to trigger the salivation response. Thus, the “conditioning” was achieved when the sound of the bell on its own was able to make the dogs salivate in anticipation for the food.

The term operant conditioning was coined by a behaviorist B.F. Skinner. Skinner conducted experiments with rats using a device called the Skinner box. The box was a cage set up so the rats could automatically get a food reward if they stepped on a lever. The lever caused food to be released. From these experiments, Skinner observed how reinforcement could lead to increases in behaviors where punishment would result in decreases in behaviors.

Reinforcement is a consequence that increases the likelihood a response will occur. If you are using reinforcement, you are trying to increase a behavior.

There are two types of reinforcement.

Positive means adding a stimulus, while negative means removing a stimulus. Thus, positive reinforcement is the addition of a good stimulus after a response in order to encourage the response to continue. An example of this would be giving someone praise after a desired behavior is displayed. 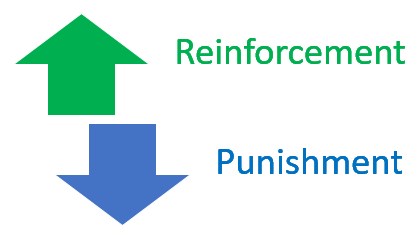 Punishment is a consequence that decreases the likelihood a response will occur. If you are using punishment, you are trying to decrease a behavior.

There are two types of punishment:

Positive punishment is the addition of an undesirable stimulus after a response so that the response will occur less or stop. An example would be to give someone extra work for misbehaving.

Negative punishment is the removal of a pleasing stimulus after a response so that the response will occur less or stop. An example would be taking away television or video games from a child for misbehaving so he or she will stop misbehaving.

Bandura first demonstrated observational learning in his famous “Bobo-doll” experiment. In this experiment, children imitated the actions of adults.   After seeing adults hit a doll, children would assault the Bobo-doll. The experiment showed that children learned the aggressive behavior by observing it.