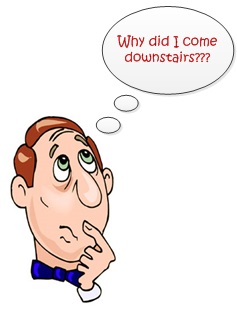 Everyone forgets things; like a person’s name, where they left their keys, the ending to a movie, or how to do math problems.  However, the reason why we forget something may differ.  Have you ever felt like a piece of information has just disappeared from memory?  Or have you had situations where you have no memory of a certain event?  Or maybe, you know certain pieces of information exist in your mind, but you just cannot seem to retrieve it.

The inability to retrieve a memory is only one cause of forgetting.   We may forget because the information was never in long-term memory in the first place.  The way information is encoded affects the ability to remember it.  If it is not coded effectively, we will likely forget the information in the future.  We may also forget specific information because we confuse it with other information which we have processed.  Information may also be forgotten simply because we have not thought about in in a long time.

The main reasons for forgetting include:

The inability to retrieve a memory is one of the most common causes of forgetting.   Retrieval failure is the failure to recall a memory due to missing stimuli or cues that were present at the time the memory was encoded.  This theory is that a memory is temporarily forgotten simply because it cannot be retrieved, but with the proper cue that information can be brought to mind.  For example, you might not remember the name of an actor in a movie, but his name might suddenly pop into your mind if you see a clip from a movie or if someone tells you the name begins with the letter “L”.  The movie or the letter would be acting as a cue for remembering the actor’s name.

With retrieval failure, the information still exists in memory, but just not readily available without specific cues.  A good retrieval cue will be consistent with the original encoding of the information.

The inability to remember information may sometimes have less to do with forgetting and more to do with the fact that it never made its way into long-term memory.  This type of forgetting is caused because the person did not pay attention in the first place.  Encoding failure or ineffective coding may prevent information from entering long-term memory, and thus the information never being stored to be able to be retrieved at a later date.  This may happen when you meet someone and later you cannot remember his or her name.  This is probably because you were preoccupied when you were introduced, and the name never made it to long term memory.

An example of ineffective coding can also be exhibited by trying to draw the back of a dime from memory.  Chances are you probably remember the shape and color, but probably could not draw a lot of the details even though you have seen hundreds of dimes over the course of your life.  The reason for this is that only details necessary for distinguishing dimes from other coins were encoded into your long-term memory.

There are two types of interference:

Proactive interference is when an old memory makes it more difficult to remember new information.  Current information is lost because it is mixed up with previously learned information that may be similar.   For example, you could have trouble learning a new math concept because it conflicts with preconceived notions or assumptions you may have regarding a similar topic.  For example, if you knew the rules of rugby then started learning the rules of football, you may have trouble remembering the rules of football because they conflict with the old information (rules of rugby).

The Decay theory suggests that when something new is learned, a memory “trace” is formed in the brain and over time the trace begins to fade and disappear, unless it is occasionally used.   With this theory, if information is not occasionally retrieved, it will eventually be lost.

The Decay Theory explains the loss of memories from sensory and short-term memory, but not from long term memory.  When information fades from working and short-term memory, it disappears because the space was needed for other incoming information.  However, loss of long-term memories does not seem to depend on how much time has gone by since the information was learned.  Most theorists believe that once information has been transferred to long-term memory it is stored there permanently.  The theorists believe that the memory is always there, but the mental path to get to the memory has decayed.  For example, people might easily remember their first day of high school, but completely forget the last movie they saw.  This may be because of the strong links (emotion, visual, etc..) the person has to the memory.  This is why people who see a horrific accident, have a hard time forgetting it.

With the Decay theory, when information fades from long-term memory, what really fades is the link to that information, not the information itself.  The information is there, but we just cannot find it.  It is like a path in the woods that leads to a cabin; the more you use the path, the easily it is to find the cabin.  However, if you do not use the path for several years, the path will eventually fade.  The cabin will still exist, but will be harder to find because the path that leads there has faded.  Fading can be prevented by encoding the information as meaningfully as possible, by frequently retrieving it, and by using effective memory strategies.

OTHER CAUSES OF FORGETTING

The Motivated Forgetting theory suggests people forget because they push unpleasant thoughts and feelings deep into their unconscious.  People may actively work to forget memories, especially those of traumatic or disturbing events or experiences.

The two basic forms of motivated forgetting are:

Forgetting that occurs through physiological damage to the brain is referred to as organic causes of forgetting.  These theories encompass the loss of information already retained in long term memory or the inability to encode new information.  This is typically caused by the gradual slowing down of the central nervous system due to aging.  Examples include Alzheimer’s, Amnesia, and Dementia.