Human Memory is the processes that are used to acquire, store, retain and later retrieve information.  It involves three domains: encoding, storage, and retrieval.

Storage consists of retention of information over time.  It is believed that we can accumulate information in three main storage areas that vary according to time frames: sensory, short-term (or working), and long-term.

Retrieval is the process of getting information out of memory.  The ability to access and retrieve information from memory allows us to actually use these memories to make decisions, interact with others, and solve problems.

Human Memory is divided into three functions for storage:

Because there is no need for us to remember everything we experience, the different stages of human memory function as a sort of filter.  The first stage is Sensory Memory which holds information coming in through the senses for a period ranging from a fraction of a second to several seconds.  Information is held long enough to process.  It can hold vast amount, but only briefly.  The Sensory memory allows a visual image, a sound, or a touch to linger for a brief moment after the stimulation is over.  That mental image or sensation is then stored in short-term memory.

Short Term  (now referred to as Working) is the second stage of human memory which holds about seven (5-9) items for less than 30 seconds without rehearsal.  Working memory is the mental workspace we use to keep in mind tasks we are thinking about at any given moment.  Working memory is what we are thinking about or aware of at a certain moment.  It is used to have conversations, solve problems, and remember to complete task.

Long-Term is the relatively permanent system with a virtually unlimited capacity.

The sensory memory retains an exact copy of what is seen or heard but it only lasts for a few seconds milliseconds after an item is perceived.  It has unlimited capacity, but information is stored very briefly in the sensory area. We attend to only certain aspects of sensory information, allowing some of this information to pass into the next stage which is short-term or working.  Visual sensory memory is called iconic memory, and auditory sensory is called echoic memory.

Paying attention to sensory memories generates the information in short-term or Working memory.  Selective attention determines what information moves from sensory to short-term.  Short-term or Working memory allows recall for a period of several seconds to a minute without rehearsal.  The capacity of short term is very limited.  It is thought to be about seven bits in length, that is, we normally remember seven items. However, capacity can be increased through a process called chunking.

STM provides a working space for short computations and then transfers it to other parts of the brain or discards it.  Information lasts up to 30 seconds, but this can also be expanded by maintenance rehearsal.  Researchers have introduced the concept of working memory, a system that holds information while we are thinking.  Rather than being just a temporary information storage system, it is an active system.  Information can be kept in this area while people process or examine it.

The storage in both sensory and working memory generally have a strictly limited capacity and duration, which means that information is available only for a certain period of time, but is not retained indefinitely.  While many of our short-term memories are quickly forgotten, attending to this information allows it to continue on the next stage which is long term.

Long-Term Memory (LTM) is relatively permanent storage.  LTM can store large quantities of information for potentially unlimited duration, and we can efficiently retrieve information from long-term memory.  Unlike sensory and working memory, which are limited and decay rapidly, long-term can store unlimited amounts of information indefinitely.  Information is stored on the basis of meaning and importance.  LTM has been classified into many types of memories, based on the content and purpose of the information.

Information in long-term memory that can be verbally communicated is called declarative or explicit memory. Episodic memory is the retention of information about the where and when of life’s happenings; semantic memory is a person’s knowledge about the world. 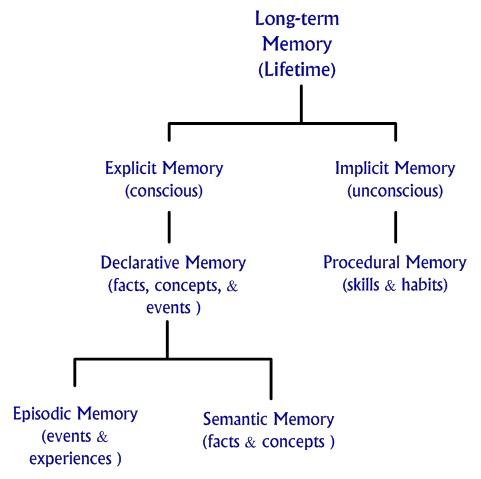 Non-declarative or implicit memory:  subsystem within long-term memory consisting of skills acquired through repetitive practice, habits, and simple classically conditioned responses.  Non-declarative refers to memory in which behavior is affected by prior experience without that experience being consciously recollected. 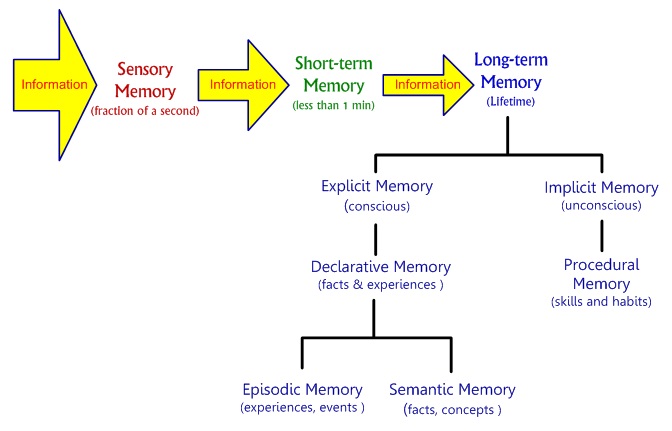