Home | How We Learn

Learning takes place when a connection made between neurons in the brain.

The learning process begins when the senses receive stimuli.   The brain reacts to the stimuli by firing neurons. When a neuron fires, a chemical known as a neurotransmitter is released. The neurotransmitter is sent across a tiny gap known as a synapse to relay a message to the dendrites in the receiving neuron. Thus, a new connection is made. These synaptic connections form new neural networks every time we learn something new. The network expands by repeating the communication between neurons creating more dendritic branches.

Synaptic strength varies according to the number of stimuli received during a learning process. The more senses involved the stronger the connection. This is why people tend to remember experiences that impact multiple senses. 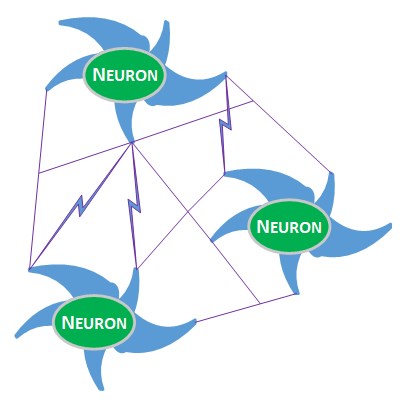 New synapse connections will be formed between neurons that were not previously connected to create new networks of neurons that represent a new memory. If the new information supports previously connected information, the firing of the neurotransmitters across the synapse strengthen the connection. This is why we remember things easier if we are exposed to it several times.

When a neuron transmits neurotransmitters across the synapse gap to relay a message to the dendrites in the receiving neuron, a memory has been created. This memory becomes part of a neural network specific to what has been learned. This connection endures whether it is being used or not. However, these synaptic connections can weaken or strengthen over time.

The brain is said to be “plastic”, meaning it physically changes as we learn or experience something new. With each new experience and each remembered event or fact, the brain changes its physical structure by making connections between neurons in the brain. Hence, a physical change occurs when a new memory is formed.