The psychomotor domain is one of three learning domains publicized in Bloom’s Taxonomy.

In the 1950’s, Benjamin Bloom headed a group of educational psychologists whose goal was to develop a system of categories of learning behavior to assist in the design and assessment of educational learning. The group identified three domains of learning.

The group focused on the cognitive domain which involves knowledge and the development of intellectual skills. The psychomotor domain was not focused on until years later.

The psychomotor domain refers to the use of motor skills, coordination, and physical movement.

Measurements of learning may be gauged in terms of the following: 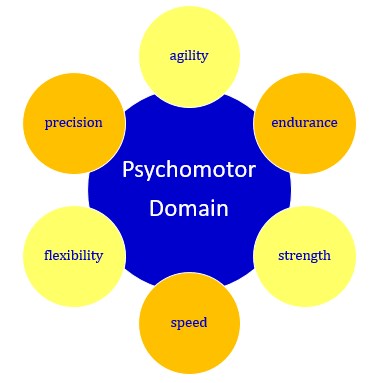 Three Versions of the Psychomotor Domain

The Psychomotor domain has been revised over the years by Dave (1970), Harrow (1972), and Simpson (1972). Dave’s is probably the most commonly referenced and used psychomotor domain interpretation. However, each has its uses and advantages.

The categories for each of the domains can be thought of as degrees of difficulties. The domains are arranged so categories proceed from the simplest to more complex levels.  For example, you may start with a simple task such are copying another person’s moves then work towards more complex levels of proficient movement with accuracy and consistency.

Dave’s Psychomotor Domain is the simplest domain and easiest to apply. Dave’s five levels of motor skills represent different degrees of competence in performing a skill. It captures the levels of competence in the stages of learning from initial exposure to final mastery. Imitation is the simplest level while naturalization is the most complex level.

Anita Harrow’s taxonomy is focused on the development of physical fitness, dexterity, agility, and body control to achieve a high level of expertise. Harrow’s taxonomy is organized according to the degree of coordination including involuntary responses and learned capabilities. It starts with simple reflexes and goes to complex highly expressive movements requiring coordination and precision.

Elizabeth Simpson built her taxonomy on the work of Bloom and others. Simpson’s psychomotor domain is comprised of utilizing motor skills and coordinating them. Simpson’s taxonomy has a focus toward the progression of mastery of a skill from observation to invention.