Performance is what the person controls while outcomes are frequently controlled by others. Unfortunately, outcome goals do not take into account how well a person performed. Goals based on outcomes are extremely vulnerable to failure because of things beyond your control. So when setting goals, you want to set a goals that is performance based and not outcome based. 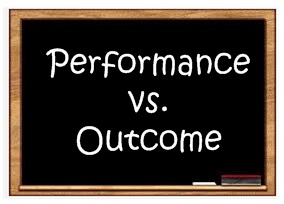 The reason you want to set performance goals is that you have much more control over the ability to achieve that goal. You may have an outstanding performance and not win a contest because other people have performed even better. After the race, you may become disappointed because you did not reach your goal, even though, you performed exceptionally. Conversely, you may perform poorly and still win if all others perform at a lower level. Unfortunately, this may give us an inaccurate assessment of you performance.

Performance goals are about control. If a person’s goal is to run the 100-meter race in 12.5 seconds, the person has greater control in achieving this goal than winning the race.

To take goal setting to the next level, the person can set process goals. Process goals give a person even greater control of achieving a goal. For example, a person can set a goal to run using the correct form, and focusing on arm and leg movements. This process goal gives the person more control over his/her performance than with performance goals. The more the goal can be controlled, the more valuable it will be.

Another example of the different types of goal setting is golfers setting a goal in an upcoming tournament. The first golfer may set an outcome goal of coming in the top 10. A second may set a performance goal to shoot 68, while a third may set a process goal to make solid contact with the ball on each shot. The second golfer has more control over shooting a 68 than the first has of coming in the top ten. However, the third whose goal is to make solid contact has even more control over their performance.

When possible set performance goals, not outcome goals. Make sure you set goals over which you have as much control as possible. There is nothing more discouraging than failing to achieve a personal goal for reasons beyond your control. These could be a difficult business environment, poor judging, bad weather, injury, or just bad luck. If you base your goals on personal performance, then you can keep control over the achievement of your goals and draw satisfaction from them. For example, you might achieve a personal best time in a race, but still finish fifth as a result of a poor judging decision. If you had set an outcome goal of being in the top three, then this will be a defeat. If you set a performance goal of achieving a particular time, then you will have achieved the goal and can draw satisfaction and self-confidence from its achievement.